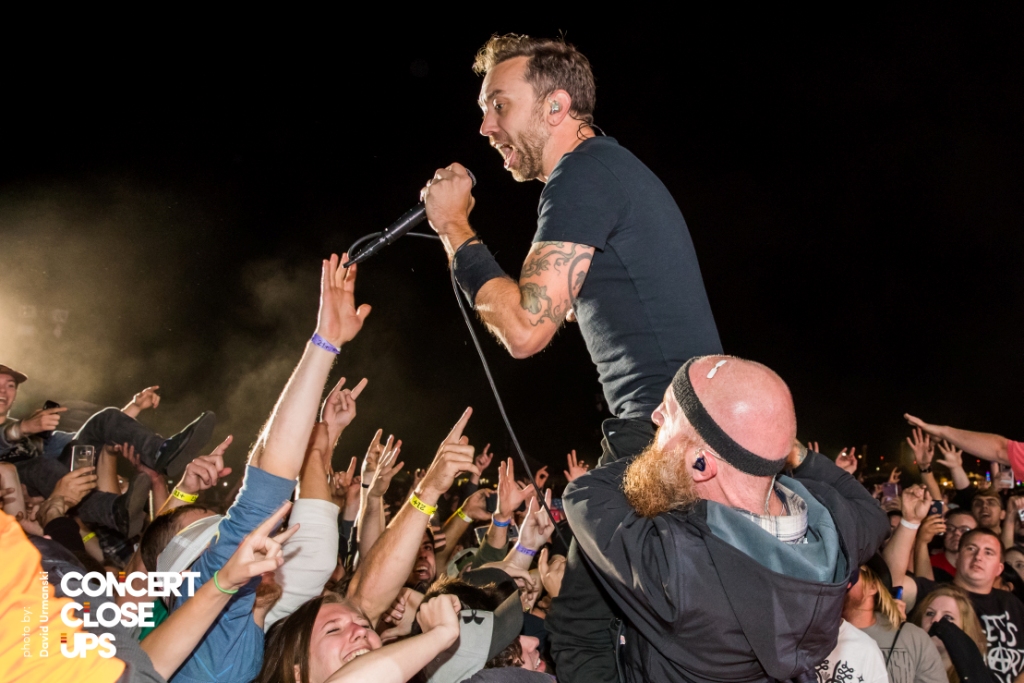 BAND BIOGRAPHY: RISE AGAINST
The darkest moments in history—those when fear and hate trump all else—are the times that define us. As politicians use bigoted rhetoric to gain power at home and abroad, and fringe groups creep from the shadows, it’s tempting to succumb to despair and defeatism. But Rise Against is challenging fans to create a bold new identity together: one that is stronger than these setbacks, and bigger than any election. WOLVES, their 8th studio release, is about recognizing the power within all of us; it’s a primal call for the prey to become the hunters.

“If you are in the wilderness and you hear wolves howling, what you’re hearing might be an animal lost or mourning,” says Rise Against’s Tim McIlrath. “But it doesn’t make you any less afraid. You know they’re there. And you know what this powerful pack of animals is capable of.”

For 18 years, Rise Against has kept its moral compass steady, using their international punk platform to speak out for social justice. The band cut its teeth during the George W. Bush administration and has released records across three presidencies, but today’s political climate forced the band to step back and rethink how they define themselves.

The record was originally titled “Mourning in America,” but after the U.S. presidential election that rang hollow. It felt somber and hopeless. Members of the band felt those emotions, too, but decided they needed to create an album that focused more on our potential than our failings. They knew it needed teeth and claws. The result is WOLVES, a soundtrack for the hunt.

The influence of the U.S. presidential election can clearly be heard in songs like “Walls” (“the monsters lost in history are now making their return”) and “Welcome to the Breakdown” (“ignoring the facts, intoxicated by the throne”). WOLVES is of course shaped by the new presidency, but it’s not limited to it. There is a spirt of resistance and optimism here that transcends our current crisis, and will outlast any politician.

Like all Rise Against records, the band tackles political struggles alongside personal ones, creating songs as complex as their fans. On tracks like “House on Fire” and “Politics of Love,” one can hear echoes of the iconic punk/folk songwriter Billy Bragg in McIlrath’s words; the personal is political, the political is personal, and it’s all rooted in a revolutionary, uncompromising love.

This evolution in Rise Against’s identity came against the backdrop of other changes for the band. For 11 years, they had worked closely with producer Bill Stevenson, of the Descendents and Black Flag fame. With Descendents on tour and Stevenson tied up, Rise Against stepped out of their comfort zone and began working with Nick Raskulinecz, the Grammy-winning producer who has partnered with Foo Fighters, Alice in Chains, and Deftones.

Recording with Raskulinecz meant moving to Nashville, Tennessee—far from the band’s familiar worlds of Chicago and Los Angeles, and a firmly red state where Rise Against has rarely played. Political yard signs and conversations around town were constant reminders to the band that they were in new territory. And even though Nashville is a music town, it’s country—not punk or hardcore. During the band’s five months in the area, these outsider feelings shaped the identity of WOLVES.

Living in the South transformed the record in some unexpected ways. “As people on the news are arguing about immigration and class warfare, we are driving down the highway and seeing Civil War battlefields and monuments,” McIlrath says. “When you tour these battlefields, you hear about what kind of muskets they used. But shouldn’t we be talking about what got us to that point as a country?”

As further evidence of the geographic influence on the record, it’s comprised not just of anthems of resistance, but also reconciliation. Living in Nashville drove home that we can’t just focus on our differences, McIlrath says. If we can stop and talk to each other, face to face, we might realize our common ground. We are all wolves in the same pack, circling at the gates.

“They say we’re divided, we are conquered,” McIlrath sings. “But our enemies have never been each other.”

“Parallax blows the doors right off with their new album Awaken. This shit’s heavy as fuck, and it switches things up enough to keep you hooked, too. You get big helpings of sludge-y chugs, airtight […]