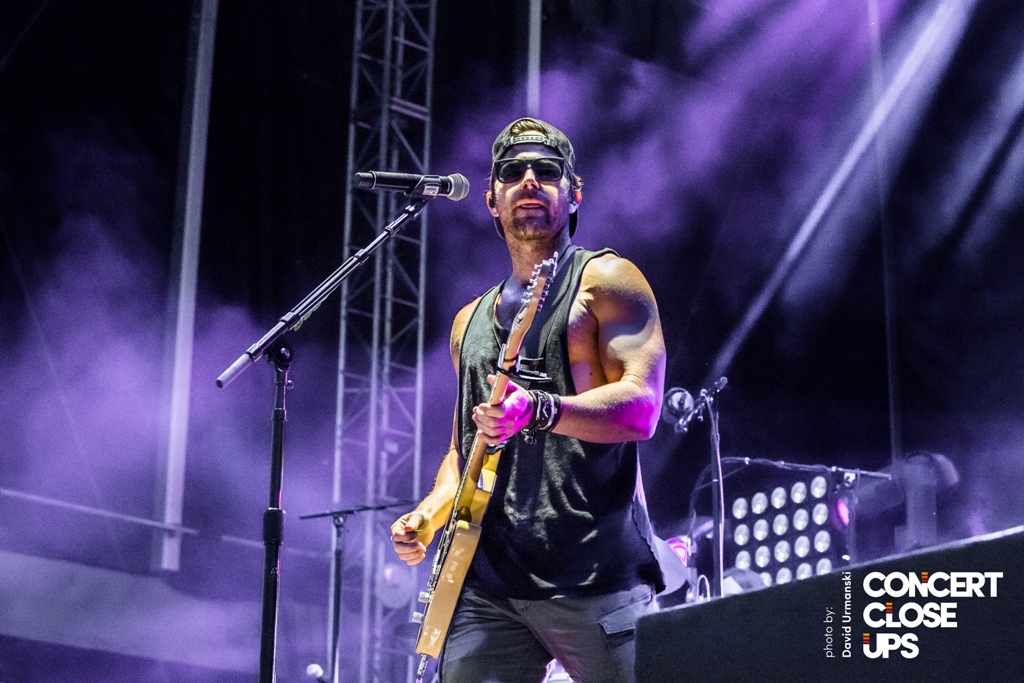 BAND BIOGRAPHY: KIP MOORE
Singer-songwriter Kip Moore combines a raw and rustic voice with compelling lyrics of honesty to create a unique sound that’s simultaneously hypnotic and edgy. His voice is weathered by life’s detours and disappointments and strengthened by his dreams and determination. His music is infused with relentless intensity, both of passion and frustration.

The boy who grew up daydreaming about life outside of the small town of Tifton, Ga., became a man who has been continually inspired by Bruce Springsteen and Kris Kristofferson to paint vivid portraits with his lyrics. “I am not drawn to the fairytale kind of love,” says Kip, who had a hand in writing every song on his debut album. “I am drawn to the real-life experiences between a woman and a man. I try to sing about the way it is, but yet at the same time, what you can hope for between a couple. I don’t intend to paint of picture of what it’s really not.”

His music powerfully captures some of the contradictions that he grapples with personally. Although he’s from a large family and enjoys musical collaborations and performing onstage, he’s an introvert who is often more comfortable being alone. “There’s a combativeness to the music too, a fight within,” he says. “With ‘Faith When I Fall,’ I know how bad I need that spiritual realm, but yet I find myself on this other end a lot of times.”

He was born in Tifton, near the Florida line, and was one of six children, the youngest boy who had three younger sisters. “You had to make your own fun, for sure,” he says of Tifton. “I had a lot of time for daydreaming. It was a great town, but I dreamed about getting out. I do enjoy going back now.” His father was a golf pro and his mother was a painter who used anything handy for a canvas, whether it was cake plates or baby crates. She also taught piano and played the church organ. “I can remember sleeping in the pews,” he recalls. “She would bring us blankets and give us a coloring book and we’d sit there while she played.”

Weekends were often spent driving to the beach with his father for fishing expeditions. “He would play a lot of Jackson Browne, Willie Nelson, Bob Seger, Tom Petty and Bruce Springsteen,” he says. “As early as I can remember, I always gravitated toward lyrics. Even when I hadn’t lived enough to understand then, they still shaped me. “During high school, he secretly began playing his brother’s guitar because he was intimidated by the talent of his mother and older brother. “I would play when nobody was around, just figuring out stuff, watching his hands and trying to do the same thing.”

He played point guard for Wallace State’s basketball team and also played on its golf team in Hanceville, Ala., for two years and then transferred to Valdolsta State University on a golf scholarship. He wrote songs daily and joined a band that performed throughout the South, providing him with all of his income. “I was one of those kinds who didn’t know what I wanted to do with my life,” he says. “I didn’t know music was an option. Maybe it was one of those things where I didn’t quite believe in myself enough.”

Although he devoted every free moment to music during college, his parents still didn’t know about his musical activities. “They were all shocked when they found out about it because they didn’t know I could sing or play,” he says. After graduation and a short stint as a bartender on St. Simon’s Island, he moved to Hawaii on a whim with just a backpack, a surfboard and a friend. They slept on an airport bench the first night and then lucked into a hut that was $50 a month. They would walk or hitchhike the mile to the beach daily. After six months of this tropical paradise, Kip thought he had found his permanent home until his friend encouraged him to pursue songwriting as a living.

“I didn’t know a whole lot about the world of songwriting,” he says. “I just did it for my own enjoyment. We talked about Nashville and I ended up saying, ‘I’m going to give it a shot.’ I flew back home and told my folks. They thought I was crazy. Now they’ll say different, that they knew all along.”

He drove to Nashville on Jan. 1, 2004 in an old black Nissan truck that contained one bag and his guitar. He immersed himself in the songwriting community, observing songwriters’ rounds for two years and honing his craft before gaining the confidence to join in. After four years of performing locally, he caught the attention of Creative Artist Agency’s Mark Dennis, who called Universal Music Group Nashville’s Joe Fisher. Not only did Joe’s encounter lead to his record deal with MCA Nashville, but it also brought about his introduction to songwriter Brett James, who produced Kip’s debut album.

“Brett gave me the freedom to find who I was as an artist, the freedom for writing a different kind of thing, a different kind of melody and lyric,” he says. “He gave me room to grow.” He also found important relationships with songwriters Dan Couch, Scott Steppakoff, Westin Davis and Kiefer Thompson, two of whom didn’t have publishing deals when he began writing with them. “There was definitely a special thing when we got in the room together,” Kip says. “I got offers to write with a lot of the bigger guns in town, but I enjoyed what I was doing with them. They were open to my ideas of being different.”

And different his debut project is, as evidenced by the album’s first single, “Mary Was the Marrying Kind,” the story of the one who got away. The dreamy and spell-binding song is the true story of one of Kip’s friends, who returned to his hometown after about six years and saw the once tall, lanky girl who had since come into her own and become a model. “It’s the story of what every man in this world goes through at some point,” he says. “It’s the story of the one that got away that you should have paid attention to. Every town, every city, everybody knows one. Every girl believes they are Mary.”

The anthemic “Drive Me Crazy” is the story of two troubled teens who find a safe harbor in each other, if only for a few fleeting moments. “They are the getaway car for each other from everyday life,” he says. “When they’re together, what they live in is in the rear-view mirror and it’s just one big infatuation love story that lasts for a very short time.

With its irresistible bass line and drums, “Up All Night” is about continuing to live life to its fullest. “’Up All Night’ is the story of not wanting to give into your age and how life is supposed to be lived once you reach a certain age,” he says. When Kip plays shows, he’s often asked for advice by aspiring songwriters. “Everybody’s experience is different, but I do believe it has to be the only thing,” he says. “I don’t think it can be a gray line. Either you want it and there’s nothing else or it’s not going to happen.”

For instance, Kip was offered a sales position with an enticing salary, but it required working six days a week, leaving no time for creating music. “You come to the crossroads: do you really want this? Are you willing to sacrifice everything, including relationships? I can’t tell you how many relationships have been doomed from the get-go because of this. “It only took me a few minutes to decline it. It’s such a risk and it’s an alone feeling – you feel like you’re on an island by yourself – but it’s worth every single minute. Had I taken that job, I wouldn’t be sitting here today.”

September 6, 2019 Admin Country, MUSIC NEWS Comments Off on Brantley Gilbert Turns Up the Heat in 2020 with New Fire’t Up Tour