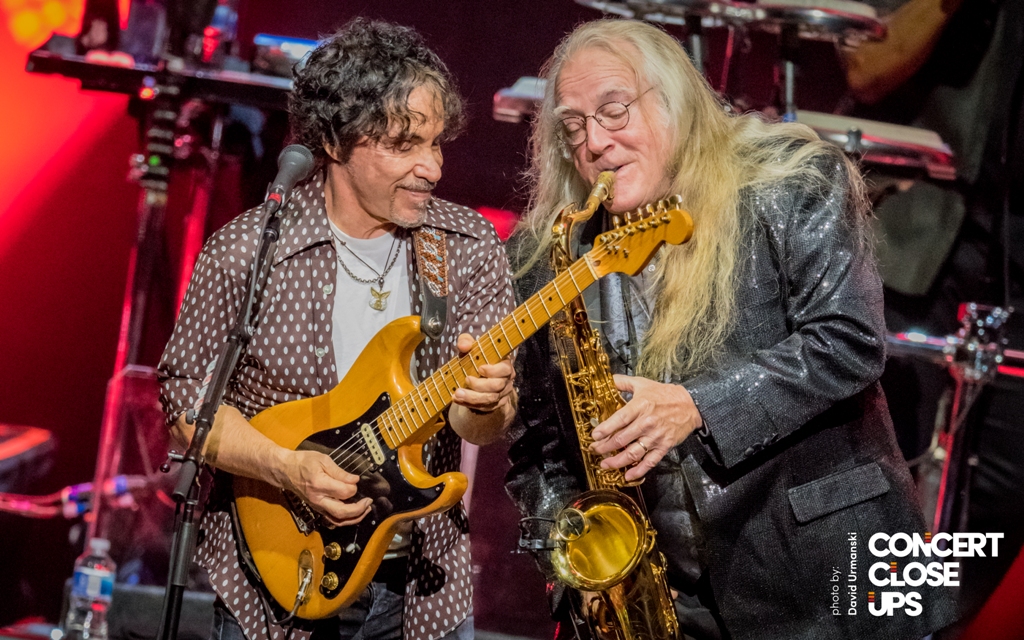 As summer is quickly coming to an end, thousands of people congregated at the American Family Insurance Amphitheater in Milwaukee, WI for an unforgettable night brought to you by the one and only Daryl Hall & John Oates. Vicious thunderstorms threatened to disturb the evening’s event, but when the time came for the real fun to begin, the retreat of the unwelcomed weather proved to be the cherry on top to a deliciously unparalleled live music experience. The scent of charred brats swept through the lakefront air as people filed into the amphitheater at Henry Maier Festival Park. Concert-goers grabbed their favorite local brew and found their seats while enjoying video clips from ‘Live from Daryl’s House’ on the big screen. The series is a webcast filmed in Daryl’s studio while collaborating with various artists, giving a new spin on some of the artists’ most loved songs. 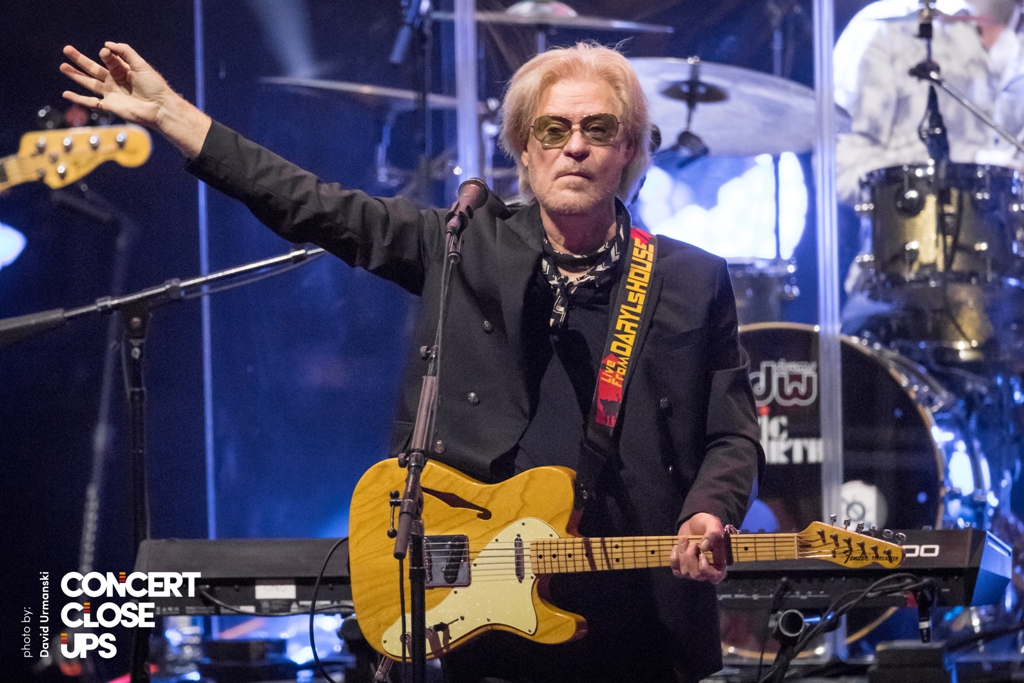 As everyone was settling into their seats, the lights suddenly dimmed and a lively group of seven took the stage. Squeeze, the English rock band from the United Kingdom, started the night with a dance-worthy set of their most well-known songs. The group was founded in 1974 by Chriss Difford and Glenn Tilbrook and have since stolen the hearts of millions around the world. Some of their most popular work includes “Cool for Cats,” (Cool for Cats, 1979), “Tempted,” (A Round and a Bout, 1990), and “Take Me I’m Yours,” (Squeeze, 1978). The band made sure to include these three favorites along with ten others into their upbeat set, warming up the crowd for the highly-anticipated event to follow.

The stage crew worked hard between sets to create a perfect visual for the crowd to enjoy while fans enjoyed refills of their favorite beverages and additional video clips from “Live from Daryl’s House.” Finally, the stage was ready and the amphitheater went dark. A large screen at the back of the stage started displaying a video that quickly went over the impressive discography of Daryl Hall & John Oates as the band members got situated in their positions. Suddenly, the stage lit up and standing in front of the packed venue were the dynamic duo in the flesh.

Daryl Hall & John Oates created the iconic rock duo in 1970 in Philadelphia where Daryl is usually found behind the microphone projecting his vast vocal range while John plucks away immense guitar riffs. In fact, they were one of the first groups to bring the blend of rhythm and blues and rock and roll to the charts. Of the 33 singles the pair released, 29 of them reached the Top 40 (US) on Billboard’s Hot 100 between 1974 and 1991. Six of those spiked to number one. Since then, the band has toured worldwide, spreading their soft rock sound to millions.

To kick off the show, the band played one of their chart-toppers, “Maneater,” from their 11th studio album, H2O (1982). The crowd rose to their feet to dance and rarely stopped for rest for the remainder of the Saturday night performance. Daryl Hall & John Oates continued their 14-song set with a mix of chart-topping songs, including a cover of Barry Mann’s “You’ve Lost That Lovin’ Feelin.’” Additionally, for three numbers, Daryl Hall serenaded Milwaukee with his brilliant piano work on the baby grand positioned stage left during extended versions of “Sara Smile,” “Back Together Again,” and “I Can’t Go for That (No Can Do).” During these songs, each member of the band took time to show off their craft via extremely impressive and prodigious solos. 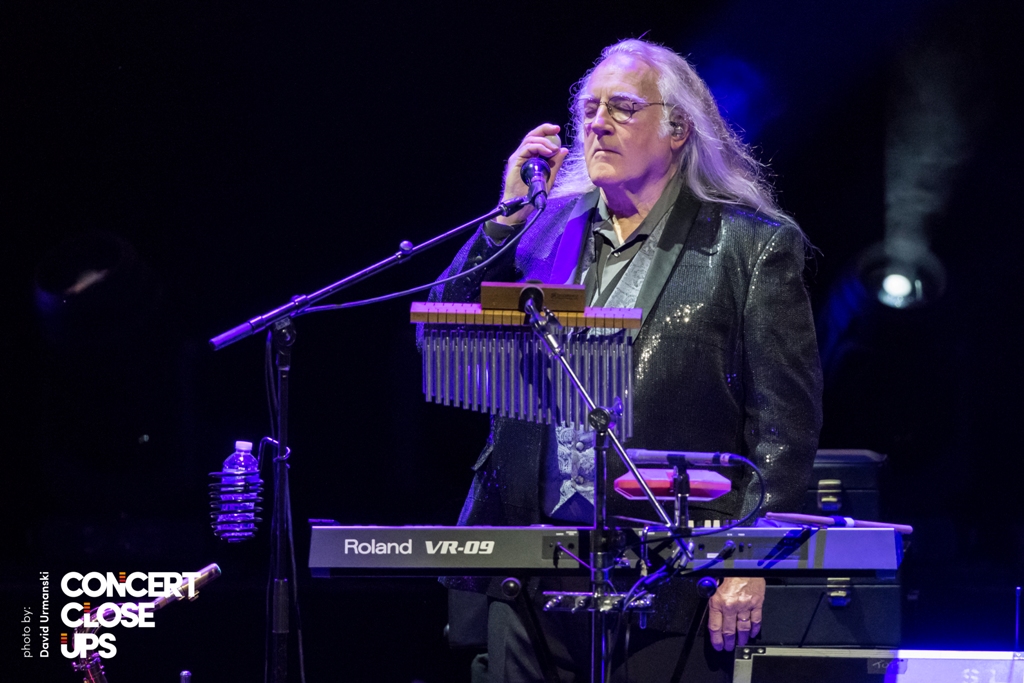 Just before performing “Back Together Again,” the duo took some time to interact with the audience. “This next song is a song from the “Bigger Than Both of Us,” album,” said John. “The title symbolizes why we’re all here tonight, because we’re all back together again!” This song was dedicated to what the world has gone through in the last year and a half leaving the audience the opportunity to take in every second of the incredible performance while the words “Back Together Again” displayed throughout the number on the massive screen positioned behind the band.

Daryl Hall & John Oates, along with the rest of their ensemble, ended the night with a four-piece encore featuring “Rich Girl,” (Bigger Than Both of Us, 1977), “Kiss on My List,” (Voices, 1981), “Private Eyes,” (Private Eyes, 1981) and “You Make My Dreams (Come True),” (Voices). Each track peaked at the top of the charts upon release and catapulted the band forward in their admirable career.

The eventful encore left the crowd of concert-goers fulfilled and elated for having spent such a stunning Saturday evening along the shores of Lake Michigan in downtown Milwaukee at the American Family Insurance Amphitheater reminiscing days of old with the world’s top-selling musical duo. Likewise, it proved to be extremely gratifying seeing the expressions on the faces of family members, friends and fellow music lovers attending a show that will not soon be forgotten.

SETLIST: DARYL HALL & JOHN OATES
Maneater
Out of Touch
Method of Modern Love
Say it Isn’t So
You’ve Lost That Lovin’ Feelin’ (Barry Mann cover)
She’s Gone
Sara Smile
Is It a Star
Back Together Again
I Can’t Go for That (No Can Do)
ENCORE:
Rich Girl
Kiss on My List
Private Eyes
You Make My Dreams (Come True)

SETLIST: SQUEEZE
Take Me I’m Yours
Up the Junction
Hourglass
Is That Love
Slap and Tickle
Pulling Mussels (From the Shell)
Please Be Upstanding
Cool for Cats
Tempted
Ann
Goodbye Girl
If I Didn’t Love You
Black Coffee in Bed