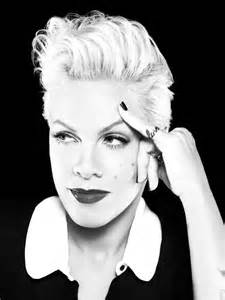 Pink is glad she proved record label executives wrong by getting her single What About Us played on the radio. The Get the Party Started singer released Beautiful Trauma, her first album in five years, in October (17) and she was warned by record company executives that her music probably wouldn’t get played because she was a female singer aged older than 35.

However, the 38-year-old proved them wrong when the album’s lead single What About Us dropped in August and became a radio favourite and chart hit. “When I came back, the record company sat me down and told me that once you are over 35 and a female popstar, radio probably won’t play you. I’m so glad I proved them wrong. It’s nice,” she said on The Graham Norton Show.

Pink, real name Alecia Moore, was even asked to perform the song at the recent American Music Awards (AMAs) in Los Angeles and she shocked viewers by singing it while doing an aerial routine on the side of the skyscraper. She also landed a Grammy nomination for Best Pop Solo Performance when the shortlist was announced on Monday (27Nov17).

During the interview, Pink was asked what she was getting up to in between albums, and she replied, “I didn’t realise it had been so long. I was doing bake sales and kindergarten.”

Pink also admitted that her daughter Willow, six, and son Jameson, who will celebrate his first birthday later this month (Dec17), aren’t particularly excited by her music. “My son used to cry when I sang and now he’s a little older he just looks away. And my daughter prefers Sia!” she joked. The singer was joined on the sofa by Elton John, Carey Mulligan, Robbie Williams and Stephen Fry. The interview airs in the U.K. on Friday night.

If you have a rock band and you’re going to play at Phat Headz, you’re going to have a few more people watching than you expected. Rock ‘n’ roll icons — everybody from Johnny Cash […]