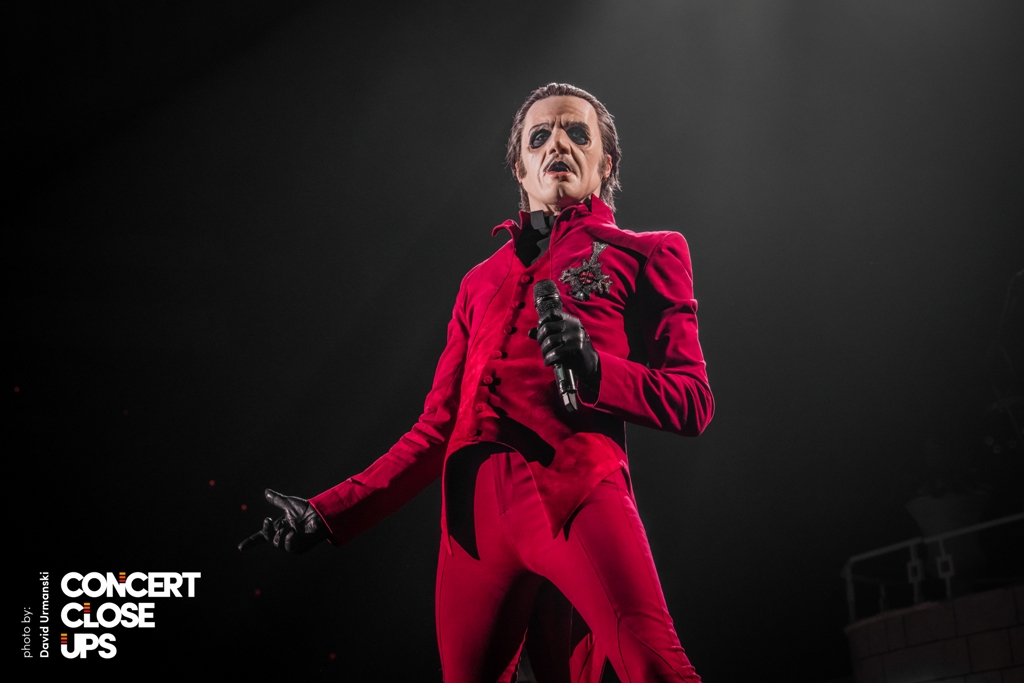 International chart toppers, Ghost, performed two-plus hours of hard rock doom metal to an enthusiastic Green Bay crowd at the Resch Center Monday night as part of their North American “Ultimate Tour Named Death” in support of their fourth album Prequelle. The album reached the top of the charts in almost all Scandinavian countries, #2 in Germany and #3 in the United States. Fronted by dynamic vocalist Jonny Hawkins, direct supporting act Nothing More kicked things off at 7:30pm performing a ferocious, high-energy set in support of their 2017 release The Stories We Tell Ourselves leaving the audience abundantly amped up for the sacrilegious headliner. 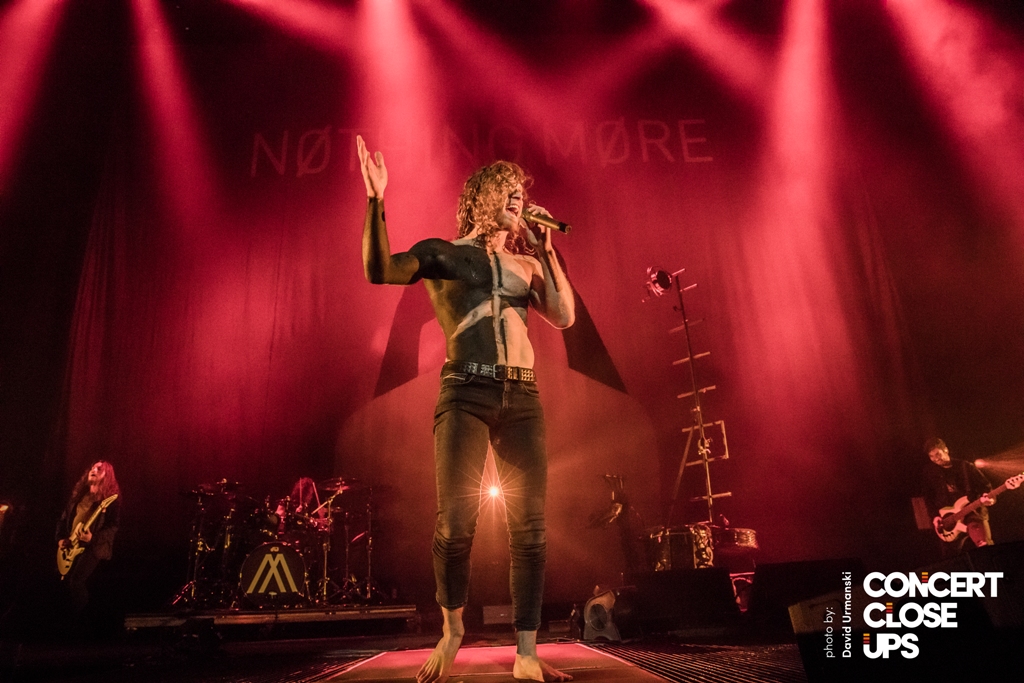 With a large black curtain draped across the raised stage reaching from floor to roof, about 15 minutes before showtime the arena echoed with chants and an acappella melody of a medieval choir. At precisely 8:45pm, the child spoken introduction to ‘Ashes’ began followed by a full band rhapsody reinforcement kicking in at the 30 second mark. The curtain dropped and the stage lights intensified leaving the seven unnamed ghouls wielding their instruments of destruction onto the expectant crowd of concertgoers as if unleashing merciless atrocity onto awaiting prey. The lights continued to flash and fade to the pulse of the mantra as the musicians, each wearing a silver horned ghoul mask, stomped and rocked their heads to the bewildering beat.

The scenic landscape was comprised of a stage constructed of large, off-white blocks reminiscent of the interior of a fortified cathedral built during the Middle Ages with a wide staircase leading to an upper platform where the rhythmic ghouls could be found performing their devotions to the anti-christ. Religious motifs, including a stained glass backdrop, further created the impression of a solemn domicile with no place for reflection, quiet or thought. Theatrics and stimulating stagecraft are an integral part of a Ghost show and the congregation was fixated on the spectacle from the start.

In similar fashion to the album Prequelle, the song ‘Ashes’ was followed immediately by smash hit ‘Rats’ which gave way to the first verse and the entrance of Cardinal Copia from stage left to the delight of a zealous crowd who responded with a roar. The cardinal was dressed in a red tuxedo, black shirt, black gloves, black shoes and an upside-down cross attached as a broach to left side of his chest. He postured and danced, often tossing the microphone from one hand to other, while singing to the full strength of his lungs and delivering a masterful and charismatic performance. He commanded the stage like an unholy ringleader, calling out to the Wisconsin audience on several occasions, “Are you with us!”, which has met with a howl of agreement from the raucous worshippers. “Absolution”, from the band’s third studio album Meliora, and “Faith”, from Prequelle, followed at which time the ghouls took a short break to allow the Cardinal to chat with his congregation. 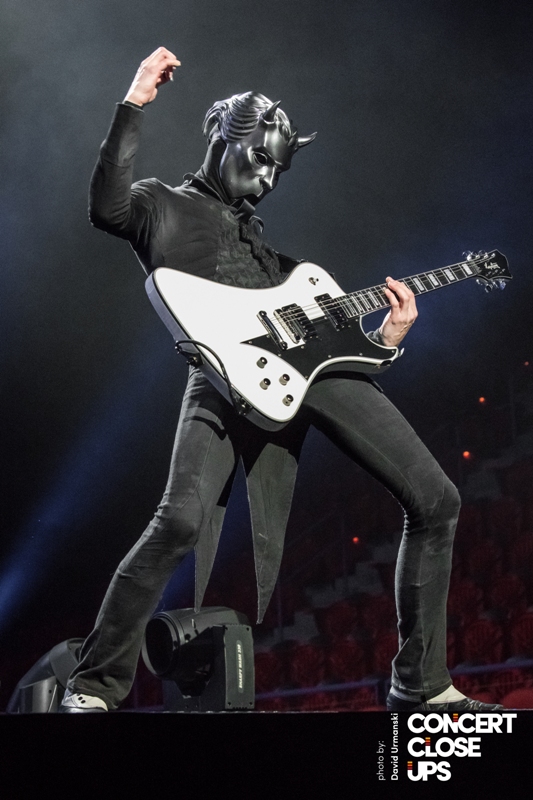 Third album, Meleria, released in 2015 was featured during the set as much as new release,  Prequelle, with each album being represented by no fewer than six songs. Fitting, since Meleria won Ghost their first Grammy. Fortunately, there was still time for a comedic guitar duel between the lead and rhythm guitarists during ‘Devil Church’. The duel was concluded with the humbled rhythm guitarist shuffling off to the right side of the stage, mock crying as he departed center stage, leaving the lead guitarist reveling in triumph until Cardinal Copia returned to reclaim the spotlight, shoeing away the proud ghoul while the band finished ‘Devil Church’.

The Cardinal disappeared occasionally throughout the show, but always reappearing mere moments later in different outfits ranging from diverse colored tuxedos to a black cassock. He kept the attention of the audience with various call outs and joked at times even referring to the concertgoers as “cheeseheads” followed by the exclamation “We’ve got spunk for you!”

‘Cirice’ was the first single released from the Meleria album and subsequently won Ghost their second Grammy. The crowd went wild as the acoustic guitar intro reverberated throughout the spooky arena. There was definitely an Alice Cooper feel to the show as the especially fitting, eerie night unfolded for the October occasion.

The progy instrumental ‘Miamosa’ was where Papa Nihil made his presence known as the first band member to receive a name with the only exceptions being frontman Cardinal Copia and Papa Emeritus before him. Papa Nihil came out during the conclusion of the second guitar solo, escorted by two body guards, and stood at the top of the staircase between the drum kit and keyboards.   Wearing an adorned white robe and white mitre, he initially appeared to being extended help walking by his escorts, but once he picked up his saxophone and ripped out a solo that Clarence Clemens would have been proud of, he showed no signs of wear. The guitarists moved up the stage steps to flank him, dancing along with the Papa to the epic solo which took the song through to its conclusion. Quite a bizarrely awesome spectacle to witness and definite crowd pleaser.

The driving ‘Spirit’ then took the band into their most blasphemous compilation of songs with ‘From the Pinnacle to the Pit’ and ‘Ritual’ both expressing Lucifer’s cast out of heaven before transitioning into the self-evident ‘Satan Prayer’ and sinister ‘Year Zero’ and ‘He Is’ which included a host of pseudonyms for his infernal majesty.  An incredibly pumped up audience that knew all the lyrics, even the Latin lines, really helped make for a highly memorable experience.

‘Dance Macabre’, the latest number one hit from Ghost, received resembling responses to ‘Rats’, ‘Faith’ and ‘Cirice’ with rapturous applause and fists flying in the air. The band extended the end of the song as white fog rolled over the stage and the light show echoed the drummer’s trashcan jam. The Cardinal then egged the crowd into screaming for yet another song before the band agreed and began. Upon the fading, final note of ‘Square Hammer’, the indoctrination of evil was complete and the Cardinal and ghouls proceeded to walk around the stage waving at fans and tossing guitar picks and flowers to the audience as a country song played through the PA in the background. A thoughtful closing gesture to a truly amazing show.

What makes Ghost uniquely entertaining is their extraordinary theatrical performance, correspondingly catchy choruses complete with habitual hooks and a highly-talented cast of characters that match the magnitude of their music to the intensity of their live show. With themes ranging from the sacrilegious to the merely irreverent, the band is barreling through rock radio and the music charts and carving out their own unique niche in the interim. Further turbocharged with the release of Prequelle last year, Ghost shows little sign of slowing down and is a must see show for all self-proclaimed rockers. 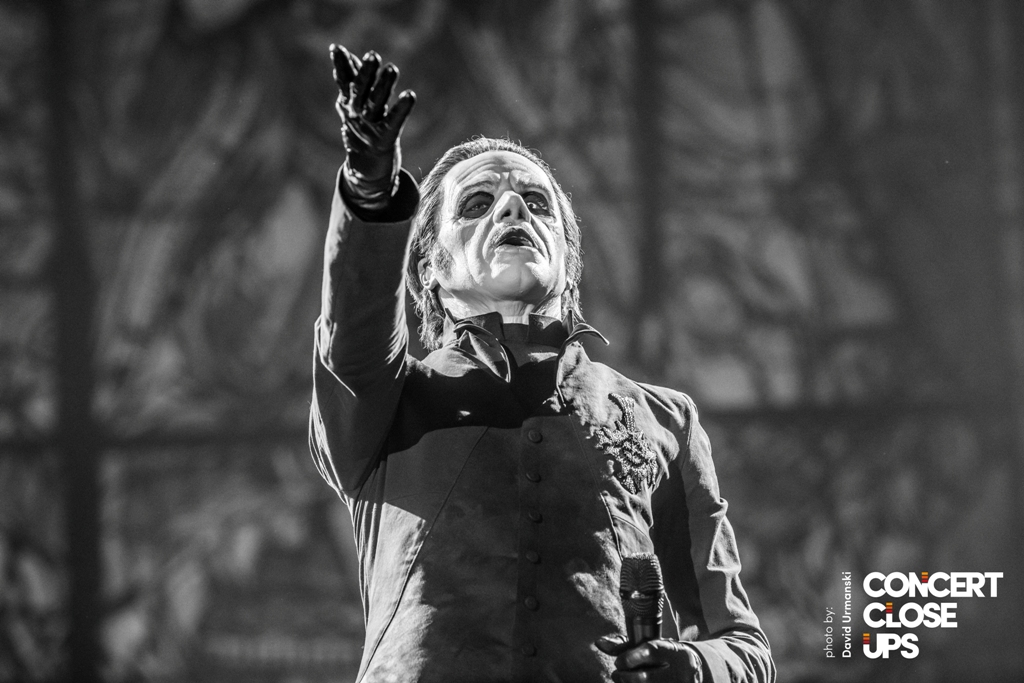 ADDITIONAL NOTES:
Cardinal Copia is the fourth frontman for Ghost following in the footsteps of Papa Emeritus’s I, II, and III.  It was revealed in 2018 that the Emeritus bloodline had run out and that a replacement was necessary with the Cardinal being the most senior member of the “team” and chosen to fill the role as Papa Nihil’s right hand man. The Cardinal is the protege of Papa Nihil and, if he can prove himself, will ultimately become Papa Emeritus IV.

IN THIS MOMENT @ The Rave / Eagles Ballroom – Milwaukee, WI

If you have a rock band and you’re going to play at Phat Headz, you’re going to have a few more people watching than you expected. Rock ‘n’ roll icons — everybody from Johnny Cash […]