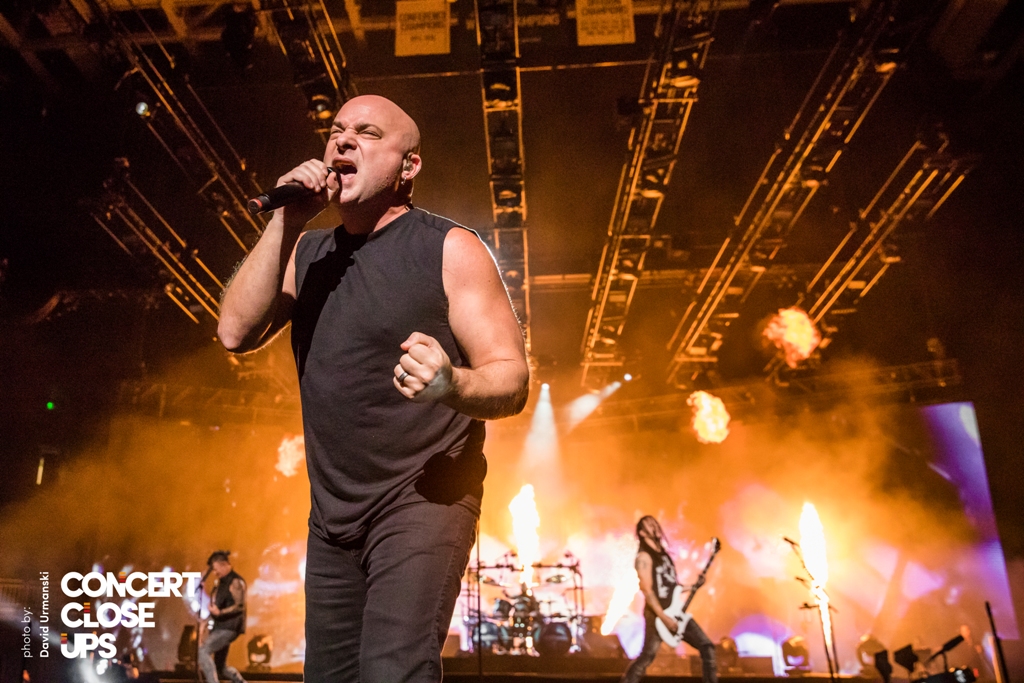 After displaying a huge vocal range on the incredible cover of “The Sound of Silence” from the 2015 release Immortalized, David Draiman and Disturbed continue to explore more of the same on their latest release Evolution. The aptly named Evolution includes experimentation into different areas of rock that don’t necessarily fall neatly into their previous ‘heavy metal’ or ‘nu metal’ classifications. However, based on the album’s reception, that doesn’t mean the heaviness and power vocals fans have become accustomed to hearing are absent and, as a result, Disturbed devotees have responded by making Evolution the bands’s sixth straight Billboard top five album.

Formed in Chicago in 1994, Disturbed burst onto the rock scene six years later in 2000 with their debut studio release The Sickness which reached number one on the Billboard chart and went on to sell over five million copies nationwide. They followed with an amazing run of four straight platinum albums and four straight number one debuts on the Billboard chart. In 2010 the band took a hiatus to allow band members to pursue personal projects, then returned in 2015 with another platinum best-seller, Immortalize. In January of this year, Disturbed began a worldwide headline tour in support of Evolution and concluded the tour with this show at the Fiserv Forum in Milwaukee.

As lead vocalist, David Draiman, shared later in the evening, he attended a religious high school in Milwaukee during his freshman year. It does not seem likely that this factored into the decision to end the Evolution tour here, but it did allow for a Wayne’s World reference (Algonquin for “The Good Land”) and also a chance for him to say that instead of a life as a rabbi, he decided to become the singer of Disturbed. 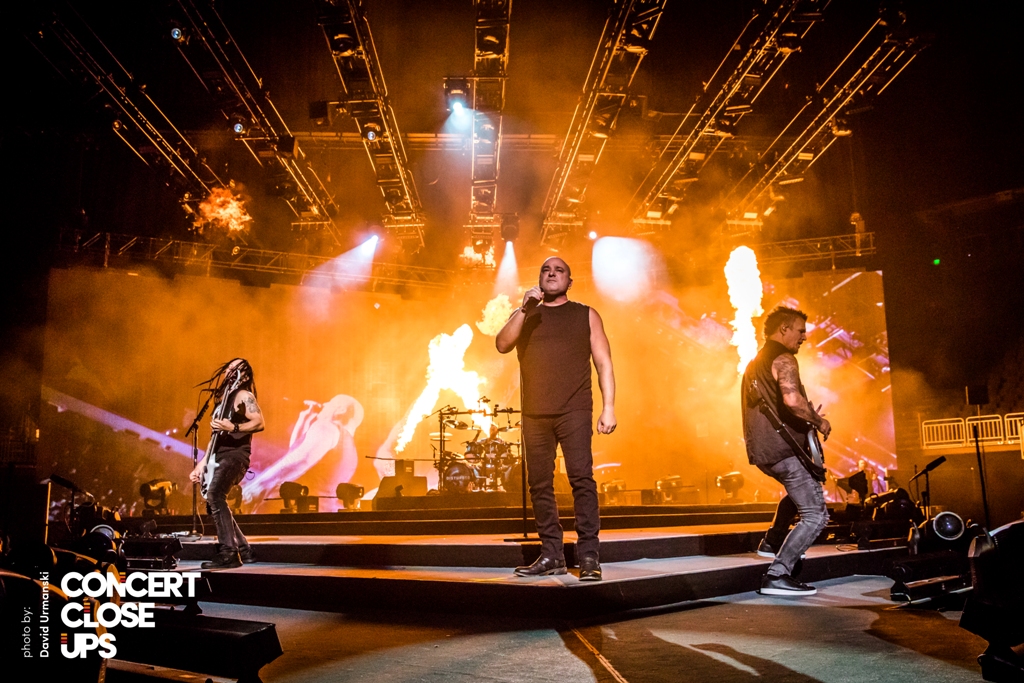 The stage included levels and stairs, illuminated by blue trim, coming to a point that split the front row into a ‘V’ similar to the tip of a sharp spear. Behind the drum kit, running the full width of stage, was a high definition video screen which displayed effect laden images and video messages between songs. Hanging from the ceiling was a system of trusses and lights that extended over and past the front of the stage which, when lit up along with stage flooring, created a runway of lights that cycled through a variety of patterns and all the colors of the rainbow. Coupled with whirling spotlights, the cascading lights were timed perfectly to the band’s compositions and turned what was expected to be a great show into a legendary concert to remember. 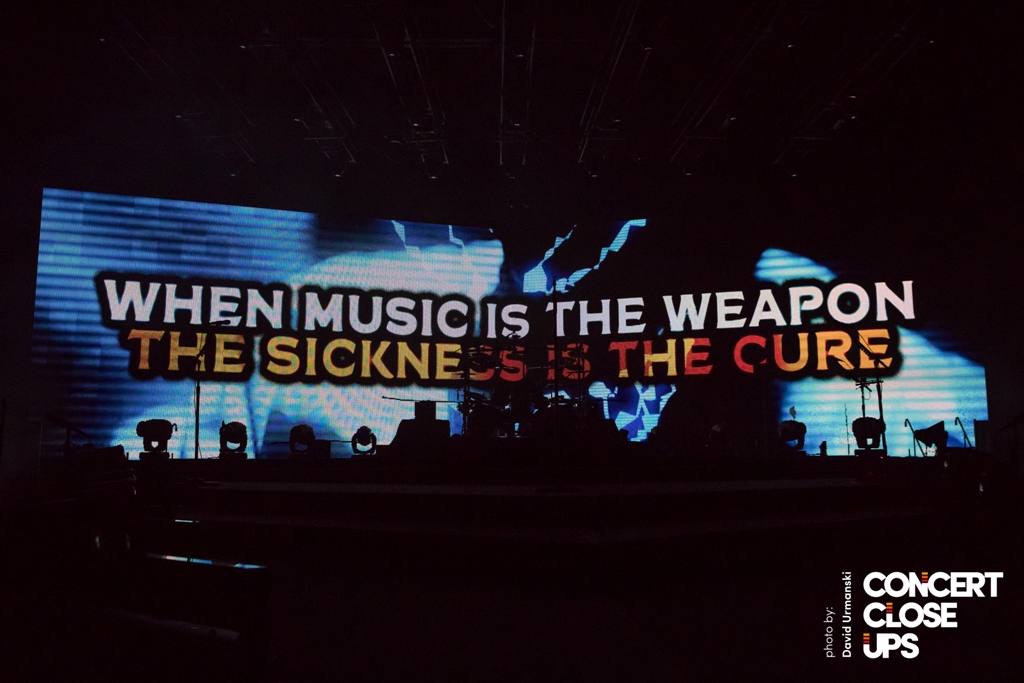 The concert opened with a video montage highlighting the band’s career and how they turned into a legitimate sensation upon release of The Sickness, leading into the perfectly powerful piece and anthem “Are You Ready?” from Evolution followed by “Prayer”, “The Vengeful One” and “The Animal” with each song accompanied by video clips flashing in the background. “The Vengeful One” including enough flame thrown pyro to burn down a small village.

Between songs, frontman Draiman, spent some time verbalizing to the crowd of concert goers that no matter what is being discussed in the media and on the internet, “No one gives a &$!% what side the fence your politics lie tonight!” He then went on to explain how singing the same songs in unison shows that the entire audience is here for same reason…to escape the noise for a few hours and come together as human beings. He went on to exclaim, “At the very notion that they would try to convince you otherwise simply stupifies me!” at which point the frenzied fans went uncontrollably berserk to hit single “Stupify” from the studio album The Sickness.

While performing “Hold On to Memories”, the band was accompanied by photos and videos of family and friends to include fellow rock legends Chester Bennington, Chris Cornell and Vinnie Paul who recently passed away. “A Reason to Fight” was dedicated to those who have battled and continue to battle mental health issues, a universal subject that David Draiman points out as far reaching and extending outside the music community. The singer then asked the audience to raise their hand if they face or know someone who faces such battles. A poignant and eye-opening experiment resulting in very few hands left un-raised. There was also a public service announcement shown after the powerful “No More” which encouraged those in attendance to take initiative to intervene should they believe someone close to them is battling addiction or depression. 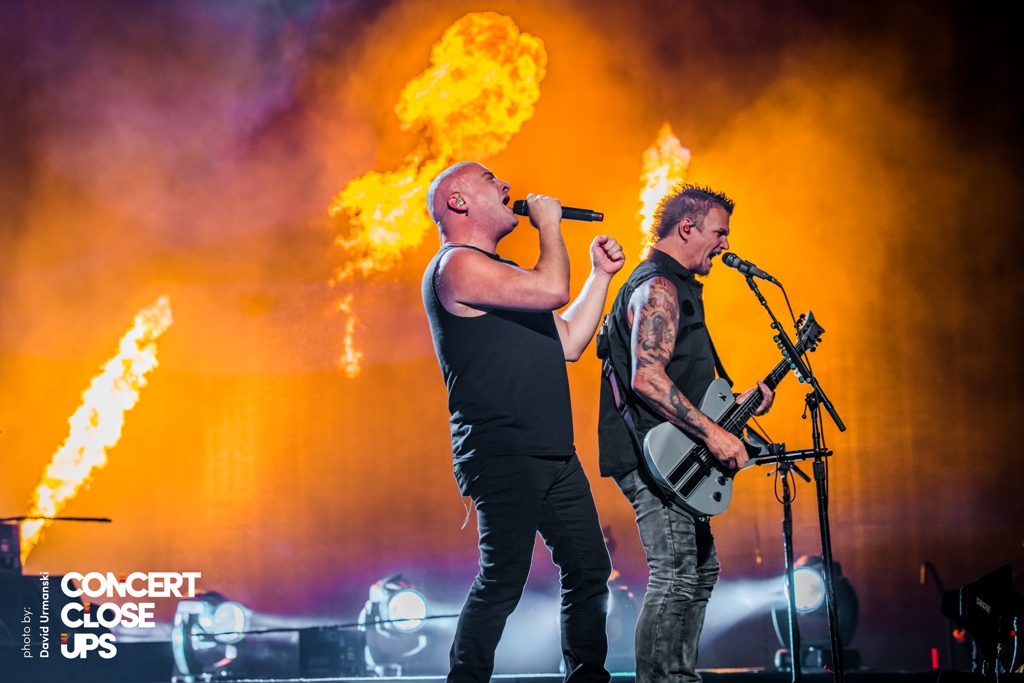 As if the audience had not been dazzled by the lighting, video content and pyro up to this point of the performance, the band’s execution of fittingly titled “Inside the Fire” took whatever contentment there was for the visual effects and turned it on its head. At about the midway point of the song, during a short bridge that transitioned into Dan Donegan’s furious guitar solo, the catwalk behind the drum riser erupted in flames and jets of fire shot into the air in periodic bursts while ropes of fire hung from the arena’s rafters. This was the real deal and introduced heat that was palpable to the back corners of the arena leaving contemplating fans wondering what kind of hoops the crew had to jump through to get approval from the fire marshal. It was a spellbinding and bar-raising demonstration. Being the final number of the set, the band exited the stage leaving the passionate fans wanting more.

As expected, Disturbed did not come to Wisconsin to disappoint. When the band returned for the encore, they brought a young man in wheelchair on stage, along with his family, during “The Light” which conveys a message of positivity. According to David Draiman in a recent interview, “Most people are quite apprehensive about the ‘dark’ periods and experiences of their lives. However, sometimes those dark periods of time are a necessary path we must take in order to finally see, ‘the light,’ so to speak.” Additionally, Draiman also referred to audience as “my brothers, sisters, family, blood” throughout the concert. It is acts like these that show that Disturbed is not just talk and are as heartfelt about their fans as they are about their music. In can be interpreted as genuine gratitude and the fact that we need to treat each other as family despite our differences. In grand affair, Disturbed then capped off an epic night with their most popular hit to date and most highly anticipated song of the evening “Down With the Sickness” which brought the house down leaving the Milwaukee concert-goers beyond satisfied for ending the tour with them. 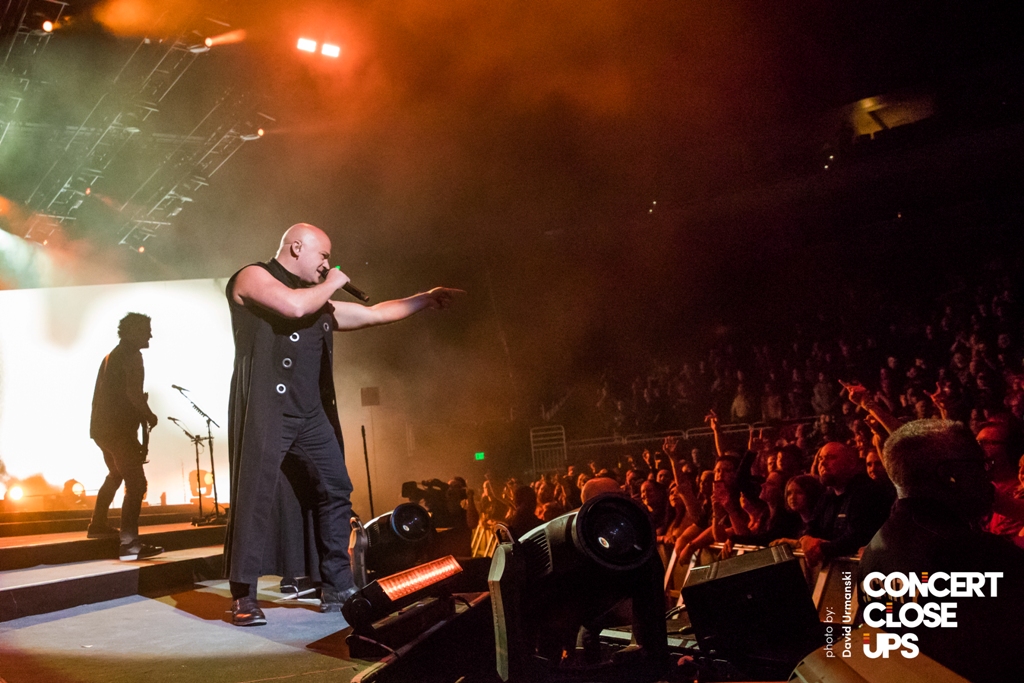 ENCORE:
The Light
Stricken
Down With the Sickness