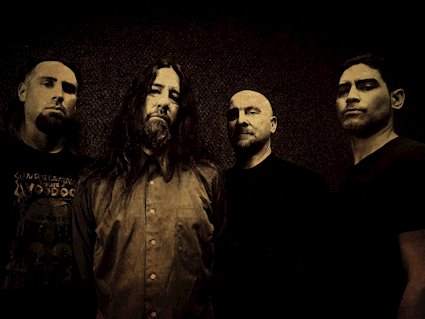 OUT TODAY! The debut digital album from RETURN FIRE is available now! Thanks again for checking out the promo and looking forward to your coverage of the record. -Ebony

Produced by Joe Nunez and recorded, mixed, and mastered by Scott Creekmore at Mercenary Digital Studios in Zion, Illinois; RETURN FIRE’s throat slashin’ thrash debut is officially released today and available now via Bandcamp at: returnfire.bandcamp.com and Spotify. Erupting into the metal world’s face like a guided missile, RETURN FIRE marks the triumphant re-emergence one of modern metal’s most widely respected diehards. As a former member of Soulfly and numerous other acclaimed bands, the incredibly talented drummer Joe Nunez needs no introduction to discerning headbangers. Maniacal drumming meets piercing shred in this full on thrash assault that’s sure to rip our head clean off your shoulders! With the official lineup of Joe Nunez on drums, Kevin James on vocals, Vince Salvador on Bass and guitarist Scott Cohen RETURN FIRE is here to tear the planet apart with their distinctive sonic attack!

JOHN 5 and The Creatures Confirm 2020 Tour with Queensryche

Guitar wizard JOHN 5, who spent the better part of 2019 performing in front of sold-out audiences, will kick off 2020 with yet another tour, this time taking JOHN 5 and the Creatures on The […]