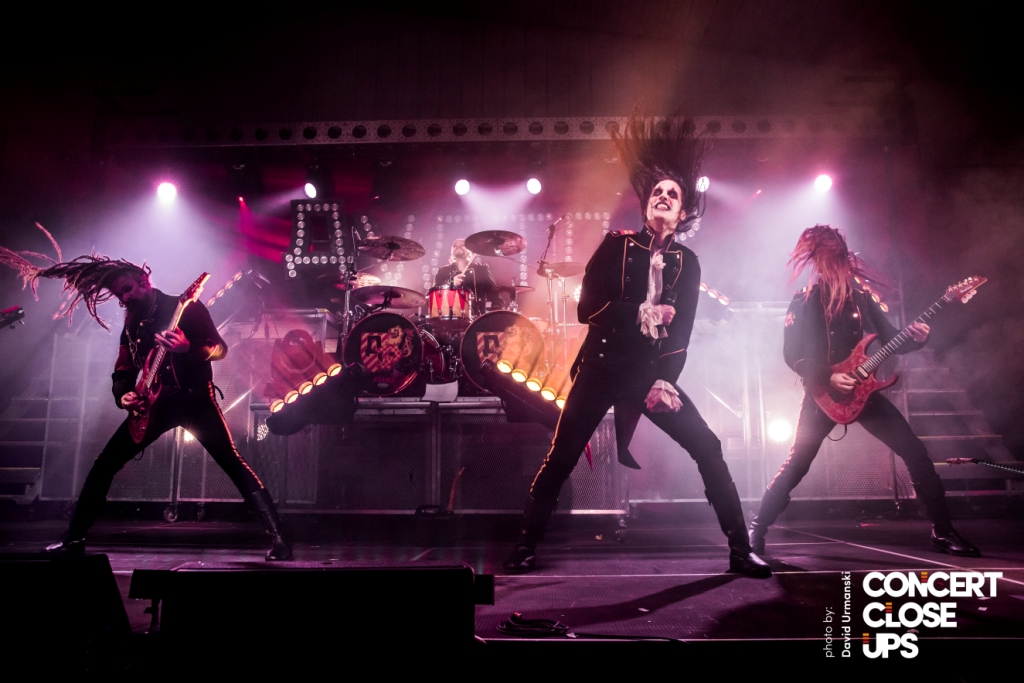 A dark, twisted circus sideshow that’s built around bombastically grooving melodic death n’ roll is swinging forward with captivating glee, mesmerizing merriment and the plundering power of lethal pirates toward those brave souls who hand over a ticket to be torn by Avatar and their Black Waltz, the fourth album and first proper American release from the Swedish masters of mayhem.

Within Avatar’s diverse songs, a steady focus on the fluid and organic power of the riff (recalling the thunderous foresight of heavy metal’s original wizards, Black Sabbath) takes flight combined with an adventurous sprit veering off into the astral planes of the psychedelic atmosphere conjured by pioneers like Pink Floyd back in the day.

Avatar has found a footing that combines the best of rock n’ roll, hard rock and heavy metal’s past, present and future into an overall artistic presentation that is thought-provoking, challenging and altogether enchantingly electric. With the grandiose showmanship of American professional wrestling, the snake oil salesmanship of early 20th century vaudevillian troubadours and the kinetically superheroic power of early Kiss, Avatar lays waste to lesser mortals with ease. Whether somebody gets their rocks off listening to Satyricon or System of a Down, they’ll find something suitably deranged here.

“We’re in this weird field, caught in a triangle between extreme metal, rock n’ roll and what can be described as Avant-garde,” confesses Avatar vocalist Johannes Eckerström. The all-enveloping theme park vibe of the band’s music and visual counterpart means that, naturally, “it’s turning into something bigger.”

“I have been in this band for ten years. I grew up in this band,” Eckerström explains. “We’re somewhat veterans on the one hand. But we’re the new kids in the neighborhood in America at the same time.”
Avatar came of age as “little brothers” of sorts of the famed Gothenburg scene that spawned the celebrated New Wave Of Swedish Death Metal. The band’s debut album, 2006’s Thoughts of No Tomorrow, was filled with brutal, technical melodic death metal to be sure but already, “We tried to put our own stamp on it,” the singer assures. While the following year’s Schlacht still contained flourishes of melody, the unrelenting metallic fury reached an extreme peak. “Intensity was very important,” he says, with some degree of understatement.

Where to go for album number three? “We basically rebelled against ourselves,” Eckerström says of 2009’s self-titled collection. “We figured, ‘We can play faster and make even weirder, more technical riffs,’ because Schlacht was cool. But to take that another step would have turned us into something we didn’t want to be.”

Instead Avatar rediscovered their inherent passion for traditional heavy metal and classic rock n’ roll. “We decided to remove some unnecessary ‘look at me, I can play!’ parts and added more groove. We added a whole new kind of melody. It was awesome to be this ‘rock n’ roll band’ for a while. It was refreshing and liberating.”

Black Waltz sees Avatar coming completely full circle, returning to a more aggressive form of heavy metal but incorporating the lessons they learned while jamming on big riffs with album number three. “We finally came to understand what a good groove is all about and what a great fit it was for our sound,” notes Eckerström.

Tracks like the appropriately titled “Ready for the Ride,” the rollicking “Let it Burn” (which dips into some delicious stonerifficness), the anthemic “Smells Like a Freakshow” (a modern day twist of Marilyn Manson and Rob Zombie) and “Torn Apart” are supercharged with a dynamic range of artistic showmanship on a near cinematic scale and it’s all stitched together by a driving bottom end.

While most European metal acts who dare attempt this level of musicianship, showmanship and attention to detail seem content to toil away in the studio and lock themselves away from the crowds, Avatar have excelled beyond their peers thanks in large part to their continued focus on road work. Careening to and fro on tour busses and airplanes around the world like a marauding troupe of circus performers, Eckerström and his mates (guitarists Jonas Jarlsby and Tim Öhrström, bassist Henrik Sandelin and drummer John Alfredsson) have forged the type of musical bond that can only be brought forth from massive amounts of time spent together on the stage, in hotel rooms, in airports and partying at the venue’s bar.

Whether on tour with bands like In Flames, Dark Tranquility or Helloween, playing gigantic festivals like Storsjöyra and Sweden Rock Festival or demolishing South by Southwest, playing live is what it all comes down to for this band. “That is the final manifestation of our art,” Eckerström insists. “Of course an album is a piece of art in itself, but mainly it’s a means to reach the higher goal, which is doing these awesome shows. Touring is of the greatest importance.”

“We all just love the pirate’s life,” he admits freely. “Sailing into the city on this tour bus thingy, going to kick some ass, have that party and all the while meeting all of these people, entertaining them, encountering a culture that’s not your own. We love that.”
The want for this type of lifestyle goes back to early childhood fascinations for the good-humored singer. Reading about superheroes, watching Hulk Hogan on TV, getting exposed to Kiss – these were the first ingredients for what Eckerström would go on to create with the guys in Avatar and what has culminated now in Black Waltz.

The frontman promises that Avatar will continue to create, to captivate and to experiment. There’s no definitive endpoint in sight. It’s always about the horizon, the journey itself. “As long as you’re hungry as an artist, there are higher and higher artistic achievements. I love AC/DC and Motorhead and what they’ve established is amazing, but we don’t want to write albums that are kind of like the album before. We want to travel to a new galaxy, so to speak, every time.”

The goal is always to conquer what came before. “That is what stays with you as a mentally healthy musician. Or maybe a mentally deranged one, I’m not sure,” the singer laughs. And part and parcel to that continued evolution will be the ever broadening expansion of the scope of Avatar’s worldwide presentation: Black Waltz and beyond.

“We have great visions of what we want to do and the things we want to give to people on a stage,” Eckerström promises. “These ideas, these visions, they require a huge audience. They require a lot of legroom to be done, so I want to get into those arenas, basically. I know we would do something really magical if we got the chance. This idea is one of those things that really, really keeps us going.”

Down ‘n’ Outz, the project headed up by Def Leppard frontman and 2019 Rock & Roll Hall of Fame Inductee Joe Elliott, are set to release their third studio album, This Is How We Roll, […]