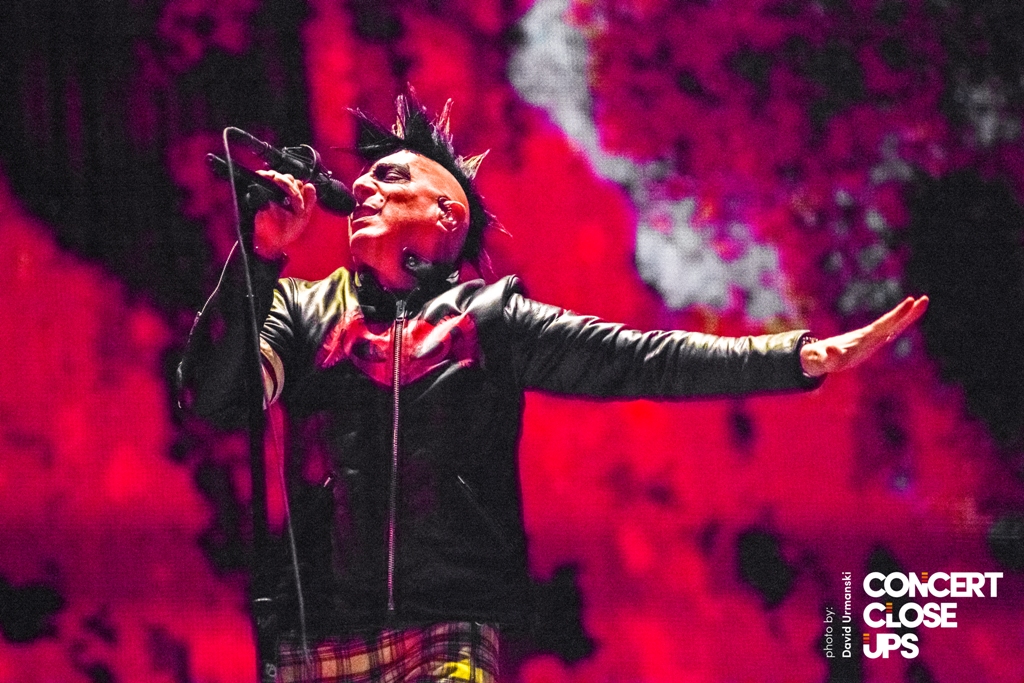 Three-time Grammy Award winners, Tool, made an appearance in downtown Milwaukee on Halloween night as part of their North American tour in support of their long-awaited album, Fear Innoculum, while selling out the multi-purpose arena, Fiserv Forum, in the process. This was Tool’s highly-anticipated return to Milwaukee since the band’s last performance when headlining the annual Summerfest music festival adjacent to Lake Michigan in 2007 so it was Happy Tool-oween for the Tool Army in attendance Thursday night as the progressive/experimental/alternative metal legends put on a truly mesmerizing and unforgettable show.

Tool does not allow photography or video recording during their concerts and fans were advised accordingly during their wait in line prior to entering the venue as well as respectfully reminded throughout their stay by venue staff should they be inspired to pull out their cell phones in attempt to snap a quick pic of the epic rock band. The eager crowd of devotees did not seem to mind and it proved to be a unique sight to witness a concert without having the distracting lights of hundreds of phones being held in the air recording shaky footage of the event as it unfolds. It was a refreshing change of pace from the norm and definitely added to the ambiance of the evening.

Aesthetically, the production included what appeared to be a curtain of dangling, thin chains formed in a semi-circle around the entire stage reaching from the lighting trusses to the stage floor. As the Fiserv went dark, the crowd let out a roar of cheers and whistles while the four Tool-men took their positions. Adam Jones and Danny Carey initiated the opening number, with the former on electronic percussion and Adam doing volume swells on guitar that sounded like a gloomy string section. Danny then switched to playing a pattern on the acoustic toms as Justin Chancellor brought the bass line in for the title track from Fear Innoculum. It was at this point the purpose of the hanging “chandelier” of thin thread-like chain was revealed as more than a mere accessory as video images were displayed on it with a giant screen behind the stage following suit, thus creating a three-dimensional, holographic loop of interweaving images and videos that pulsed to the music. Known for unorthodox stagecraft and performances, Tool’s All Hallow’s Eve appearance can best be described as a multi-sensory experience. 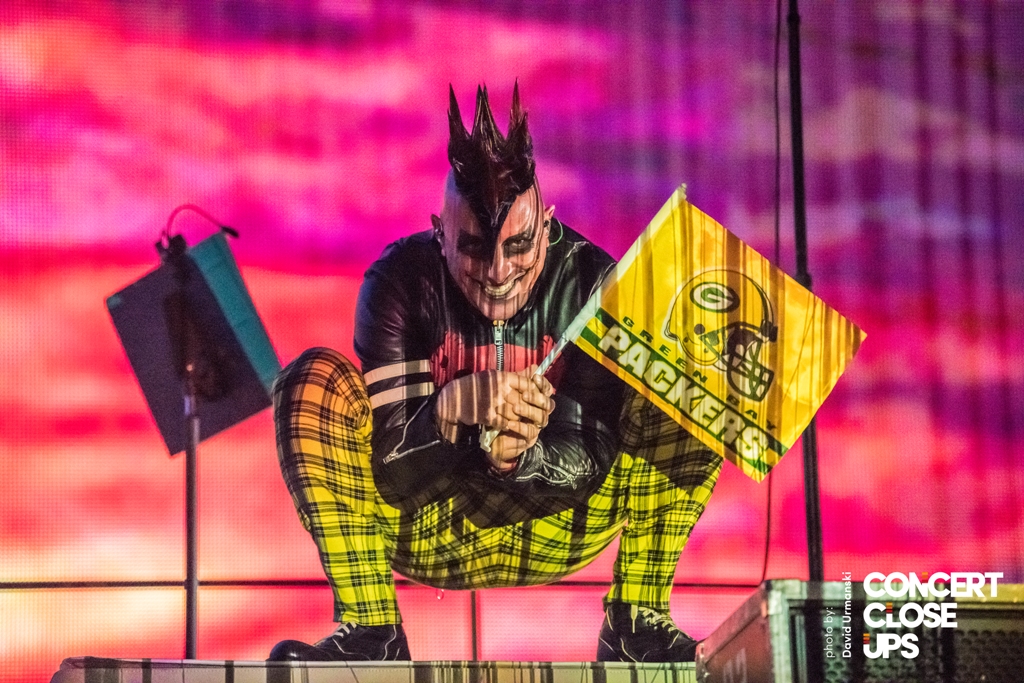 As frontman, Maynard James Keenan, took stage on a riser just right of the drum set, he wasted little time waiving and positioning a Green Bay Packers flag for all to see resulting in the delight and rejoice of the nearly 12,000 Wisconsin concert-goers in attendance. Following the completion of the new number, all ten minutes worth, the band paused and let it soak in for a few moments. As the roar of the crowd grew louder and louder in anticipation for what was coming next, Maynard cut through the cacophony with an inquisitive, “Milwaukee?”. Not satisfied with the response, he goaded the crowd with, “Ehhh… sounds more like Chicago. Milwaukee?”. In return, the audience obliged the band with a hearty roar. Evidently satisfied, Maynard bellowed the instantly recognizable huffing introduction to “AEnima” taking the crowd to new heights. As “Learn to swim…. Learn to swim…” rang throughout the arena, spot lights circled over and around the swaying crowd creating the appearance of a rising and falling sea.

As the show continued, it was evident that Tool takes the same collaborative approach they adopt when making music to the stage during their live performances. There is no one band member who really stands out as the dominant force behind the band although Maynard takes his role as frontman very seriously. All four bandmates are equally present and equally irreplaceable. While Maynard spent most of the evening on two risers immediately to the left and right of the drum riser, singing, posing, and swaying to the purposeful sonorance of his bandmates, he also spent a fair amount of time creeping over, around and behind the risers looking like a punk-rock Gollum. At one point he comically “stole” a speaker cabinet from Adam Jones’ backline, carrying it from the stage floor to the top riser where it would reside the remainder of the show. Adam Jones has understated body language while crushing monster riffs and completely filling in the mid-range of the bands sound, while Justin Chancellor is more animated and seemed to be simultaneously channeling and driving the frenzy of the rapturous crowd. Danny Carey, both the man and his massive drum kit, cast an enormous presence sitting amid the proceedings like an octopus-armed conductor commanding the legion of enthralled fans before him. Collectively, Tool is an extremely tight band, and due to the indistinguishable tone of Adam’s and Justin’s wall of sound, their live music is as equally impressive as their studio tracks. 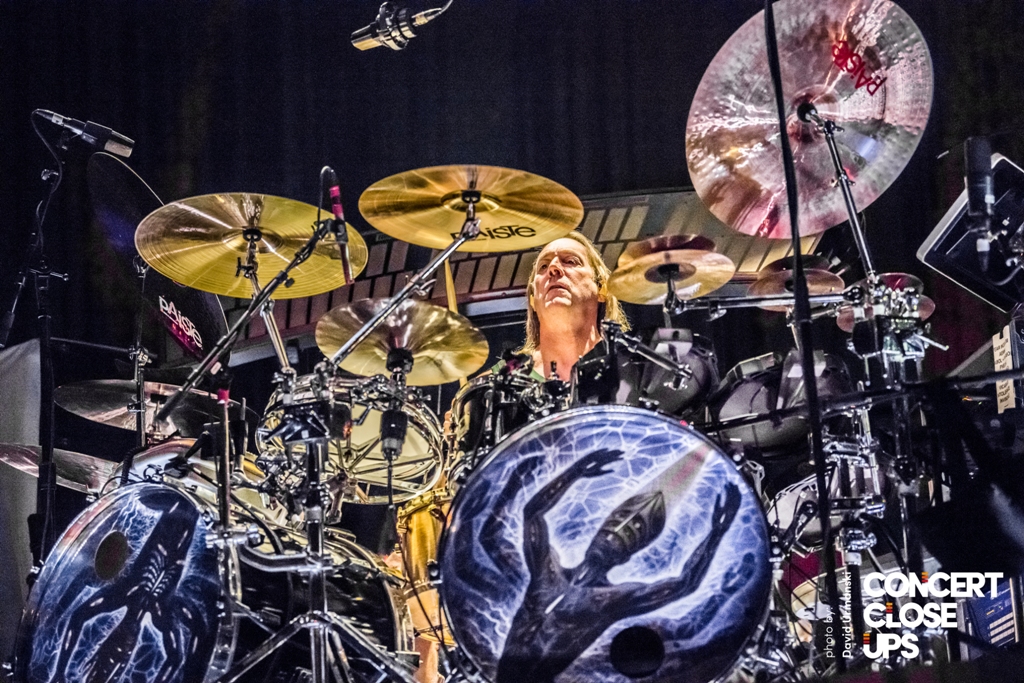 Tool’s set list was a nicely crafted representation of their entire catalogue featuring songs from the entire discography. Highlights included “Vicarious” from 10,000 Days, “Intolerance” from Undertow, “Schism” from Lateralus and the previously mentioned title track from AEnima. The audience was clearly pleased as this was one of the most consistently loud crowds from any rock show I can recall to date. The concert-goers even appeared to get louder during the occasional pause between songs when Maynard wasn’t addressing the crowd as if trying to nudge the band to get back to the tunes. With a stunning visual show complete with video, lasers and blinding bursts of light, the vivacious audience was electrified from beginning to end.

Often portrayed as enigmatic or reclusive by the media, Maynard does not come off as distant or inaccessible at all while onstage. About halfway through the set, he took off his leather jacket to reveal a Green Bay Packers t-shirt to go along with the flag that was introduced early on in the show. Maynard also showed his sense of humor when interacting with the crowd. When introducing “Intolerance,” he commanded the audience, “Hands up, all of you, under thirty!” After nearly half of the attendees proudly thrust their arms in the air, Maynard followed with, “When we wrote this next song all of you were not even sperm!” This prompted a good laugh and load cheer. Likewise, later in the show when experiencing technical difficulties with the guitar, he quipped “True story….. shit happens!” Maynard also referenced the previously “stolen” speaker cabinet by asking, “How did this get up here?”

Evidently Tool does not have encores. They have an intermission followed by more songs. Once the band left the stage after “Invincible,” there was not the usual shouting and clamoring that typically precedes an encore. Rather many concert-goers got up to use the restroom or get a refreshment. After the brief intermission, and this being a Halloween show, the band returned to the stage in costumes. Adam Jones was an uncanny double for Dwight Schrute from TV series “The Office” (complete with nunchucks). Danny Carey appropriately wore a #34 Milwaukee Bucks jersey with a skull mask and “Baby Justin” played bass shirtless while donning suspenders and a bald-baby mask. Maynard, dressed as Maynard from Tool, and lifted the ban on photography during the last song of the evening “Stinkfist”. Playing a song that fans were clearly hoping to hear, while in costume, turned out to be the icing on the cake for what was an emblematic ending to a monumental and memorable Halloween performance. 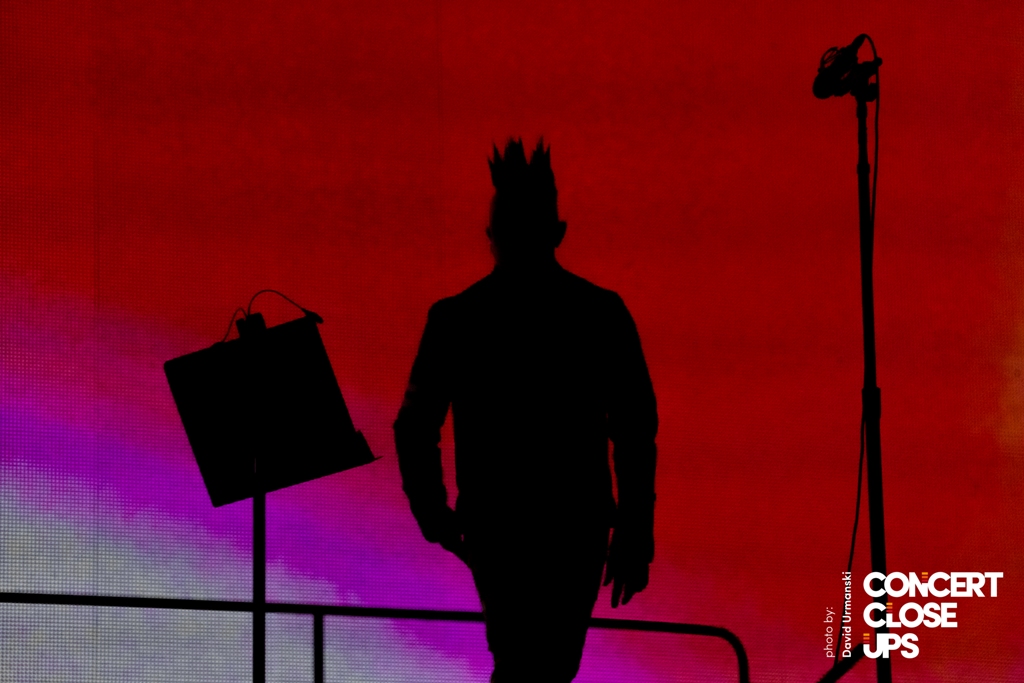