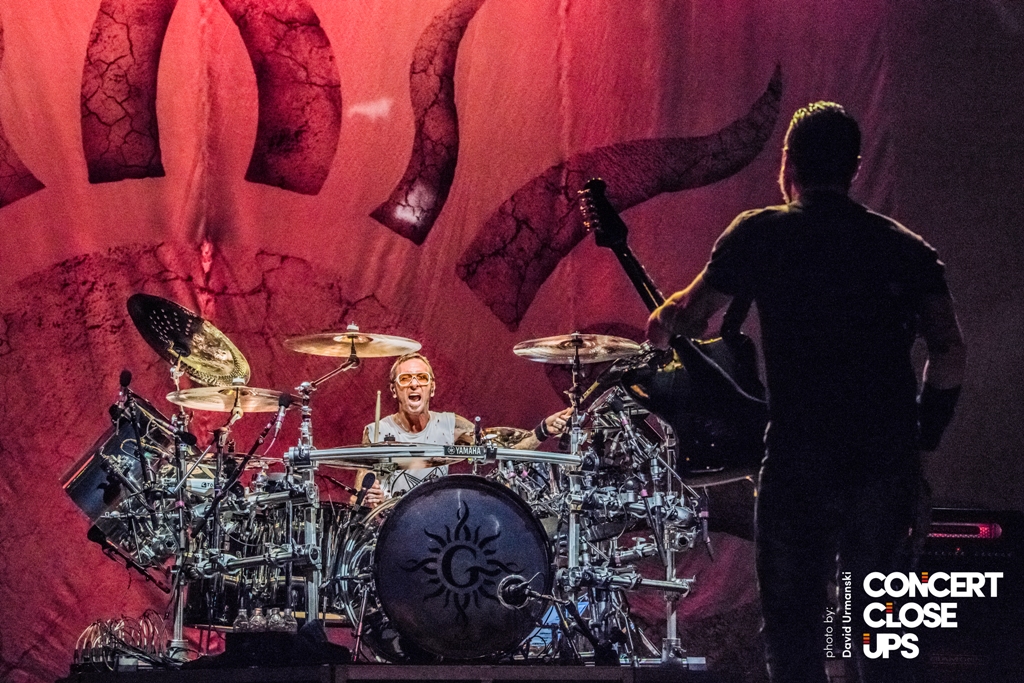 World-renowned hard rock group, Godsmack, kicked off their Fall 2019 tour in Green Bay, Wisconsin Friday night with direct supporting act Halestorm and opening act Monster Truck. 6,500-plus fans from the surrounding area and beyond descended upon Packer Nation to fill the Resch Center for this highly-anticipated concert to enjoy one of the last days of summer with many concert-goers dedicating much of their day waiting in line outside the venue eager to experience the adrenaline rush of seeing Godsmack live up close in personal. Gates opened an hour and a half before showtime, encouraging a mad rush of fans racing toward the stage barrier jockeying for position in attempt to earn a front row spot. Opening bands, Monster Truck and Halestorm, set the bar high with tremendous sets of their own, however Godsmack wasn’t going to let that keep the band from giving the fans the performance of a lifetime.

At precisely 9:15 pm, the lights went out and a classic mix of Queen and Rush songs started playing over the PA, getting the crowd amped up with anticipation for what was to come from the headlining act. As the curtain fell, the audience was hit in the face with lights, pyrotechnics and pure, unadulterated energy as Sully Erna, Shannon Larkin, Robbie Merill and Tony Rombola stepped out from the shadows. The band wasted no time giving the fans exactly what they came for opening with “When Legends Rise”, the title track off their seventh studio album released in April of 2018, bringing the arena attendees to their feet in an instant.

Transitioning immediately to the lead single and title track “1000hp” from the band’s sixth studio album of the same name, Godsmack kept the energy high with plenty of signs of fans dancing to the beat as they continued the melodious assault with “Cryin’ Like A Bitch” before moving into “Someday” with smoke cascading across the stage and quickly filling the arena with a thick blanket of fog. Continuing with the trance-like aesthetic, the arrangement quickly shifted gears to the enchanting beat of “Voodoo” allowing fans of Sully and associates the opportunity to sing-along to one of the bands most renowned songs from 1997 demo album All Wound Up with every voice in the arena resonating perfectly in sync with Sully’s last verse.

After six incredible songs, the band finally took a quick break to catch their breath to talk about their latest album. While Sully shared his passion for the ‘new, more commerical sound’ associated with When Legends Rise, in my opinion the album proves to be one of Godsmack’s best pieces of work to date. The album exudes an openness and honesty unmatched by prior albums and is an easy listen while still catering to old-school power-packed vocals, driving drum beats and intricate, heavy guitar riffs. Sully also shared his compassion for suicide prevention and mental health and how it relates to the tender yet powerful ballad “Under Your Scars” going hand-in-hand with his new project, The Scars Foundation, which stresses the importance of mental health awareness.

Other highlights of the evening included Sully making his way stage right to take over Robbie’s place at the microphone stand bringing an Alice In Chains “Man in the Box” talk box vibe to “Unforgettable” before moving onto my personal favorite Godsmack song “Awake” when I was momentarily hit with a wave of emotion like I never experienced before. In complete awe and star struck from what was happening before my very eyes, I already concluded at this point that this concert was one of the most incredible performances I’ve ever attended in my life…and there was still more to come.

After a rugged performance of “Take It to The Edge,” the band had proved their undeniable connection as a four-piece when extending “Keep Away” with an awesome guitar solo before leading into the relished and ever enjoyable drum duel between Shannon and Sully. As Shannon’s drum set moved to the front of the stage, another kit came out from behind the curtain for Sully with both percussionists facing each other for what would be an amazing and dynamic duel. Starting on the congas, Sully and the rest of the band went back to a short instrumental version of “Awake” before building to use of the full kit. Shannon and Sully took turns going back and forth with exhausting drum techniques and jaw-dropping drumstick tricks until they started to play in sync before ending the drum duel with a mash up of “Back in Black”, “Walk This Way” and “Enter Sandman”. The crowd went wild for these classic rock tunes.

Before exiting the stage, Godsmack played one of their very first singles, “Whatever”, with an extended ending and featuring mind-blowing guitar riffs throughout. Though the band said goodnight to the crowd, everyone in the audience knew they wouldn’t stop there. After a few minutes of fans chanting ‘Godsmack’ as if on a recursive loop, the quartet held their heads high as they walked back onstage to give the crowd exactly what they wanted. With a piano rising from beneath the catwalk, Sully belted “Under Your Scars” for their first encore, leaving everyone soaked with emotion and gratitude for the devotion shown onstage that night. Continuing with their first single off When Legends Rise, “Bulletproof”, the crowd didn’t hold back with yet another sing-along.

Next came a 10-minute version of “Come Together” by the Beatles. While not the typical sound Godsmack fans have come to know and love, the crowd still enjoyed every note and sung in unison while waving their hands back and forth in grand fashion before transitioning into the final song of the evening. “I Stand Alone” was sung with pure affection and dedication toward the Green Bay concert-goers who made the night possible. Once the last lyrics were sung, the last drum was hit and the last chords were strummed, the four members of Godsmack showed their appreciation to their fans by coming to the edge of the stage and taking a final bow.

Nearly two hours had gone by filled with heartfelt lyrics, driving beats and complex guitar work. With Green Bay being the first stop on the Fall Tour, fans were curious to find out how much of the show would be dedicated to new songs from When Legends Rise versus songs from prior albums Godsmack, Awake, Faceless, IV, The Oracle or 1000hp. The performance was nothing short of extraordinary and proved to be the perfect mix of old-school songs and new numbers done as only Godsmack can do it leaving old and new fans thirsting for more.

SETLIST:
When Legends Rise
1000 HP
Cryin’ Like A Bitch
Someday
Voodoo
Unforgettable
Awake
Take It to The Edge
Keep Away (extended ending)
Drum Duel, AC/DC’s Back In Black/Walk This Way/Enter Sandman
Whatever (extended ending)

ENCORE:
Under Your Scars
Bulletproof
Come Together (Beatles)
I Stand Alone