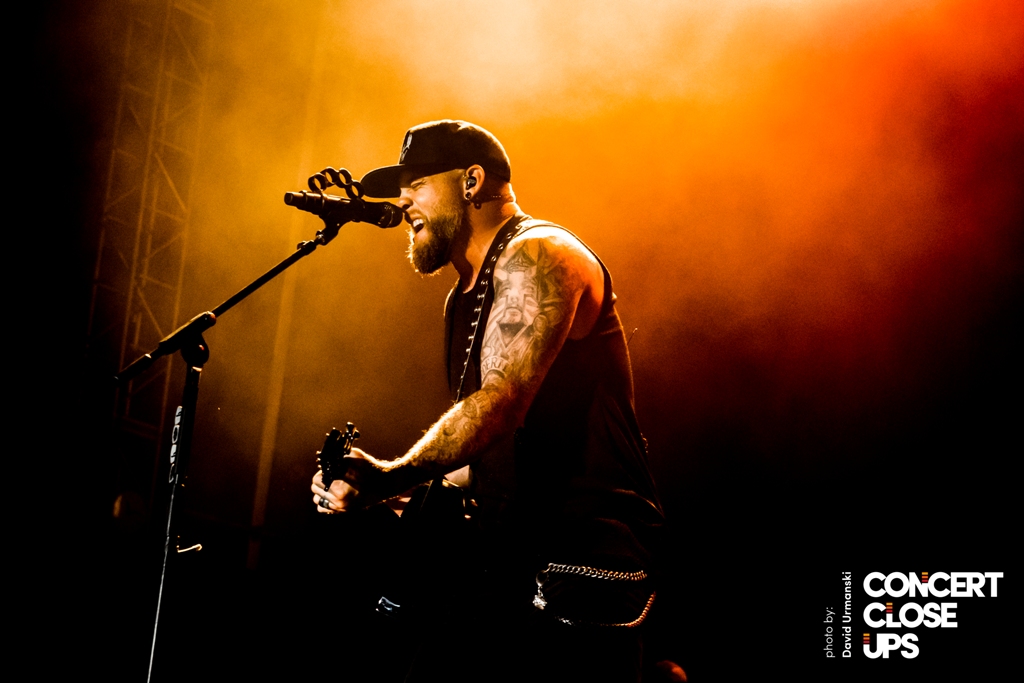 BAND BIOGRAPHY: BRANTLEY GILBERT
Brantley Gilbert is tearing up the road to Country music with his upcoming album JUST AS I AM (The Valory Music Co.), which is already burning up the airwaves and ushering in summer with his first new work in four years. Like the album’s title, the songs are an expression of who he is at this time in his life. The rings, the chains, the faith, the no apologies—“If You Want A Bad Boy,” you’ll find one in Brantley’s first song on his new album. Love him or not, his latest offering is JUST AS I AM and it is an album of unforgettable memories—for him and everyone who hears it.

Brantley doesn’t just write songs, he shares from the heart the chapters of his life through music. He is adamant about the fact that the devoted “BG Nation” is made up of his friends, not fans. He’s created a high-energy, in-your-face collection with plenty of adrenaline and testosterone. He also evokes a softer connection, proving a tough guy can be tender, too. No matter the song, he plays the guitar like an extension of his voice—an ebb and flow of emotion that resonates with millions.

Well-worn denim, metal in many forms and a pulled-down ball cap may frame Brantley, but the true art comes from what you don’t see. “I sing for the people who have helped me do my thing,” he says. His inspiration for writing comes from all aspects of his life, but he knows when he gets an “ear worm” it is a song that he needs to write now; he just has to give it legs and wings. That’s just what happened with Brantley’s #1 single “Bottoms Up.”

Brantley is excited about the renewed direction of his music as the more he lives, the more real life stories he has to share with others. He’s recruiting a new generation of fans who are less interested in genre and all about expressing themselves through the songs they sing and blurring the lines a bit. Effortlessly JUST AS I AM becomes the universal soundtrack from your best first date, the last dance of a good-bye and memories in between. This bad boy will make you want to crawl out of the bedroom window, give you the courage to start a new relationship and inspire you to close your eyes and see the candlelight, starlight, spotlights and twilight of his life … or grab your crew for a good time.

When putting the chapters of his life to music, Brantley believes if you write a song the right way, you’re still in love with someone every time you sing it, you’re still pissed when you were an idiot, and you’re still ready to party with your friends. Brantley gives the world a taste of who he’s looking for in “My Baby’s Guns N’ Roses.” It’s this passion for life that fuels his music. You feel the emotions running through each song: the longing of a guitar, the pounding heart of the drums, the changing gears on a dime as the music drives you 100 mph down one road, only to jump the curb and go another direction entirely.

While he certainly writes for himself, Brantley believes that his music reverberates with others because he is writing about life. JUST AS I AM shows you as much about who Brantley Gilbert is as who he is not. “I cannot take an engine apart and put it back together, but maybe when a mechanic hears one of my songs, my music can help him through something he’s going through in his life. If what I have gone through helps someone else, then I feel I am doing what I was put here to do. ‘I’m Gone’ is me telling others that, sometimes, holding on is not the best decision.”

He believes that songs motivate people to do something. “I don’t sing what I don’t write and I don’t write what I don’t live. I’m not the best singer; I just sing my stories, my life.” Brantley writes about lovin’, drinkin’, partyin’, fightin’, trials and tribulations, faith and triumphs. “Lights of My Hometown” and “Small Town Throw Down” give fans a taste of where Brantley came from and why he still embraces Jefferson, Georgia.

This album contains new anthems and clearly shows who Brantley Gilbert is now and what he’s come through to get where he is today. His music is deep, like the man of substance singing it, and you’ll find yourself wanting to fall in love one minute and get into some trouble the next. Life may be where Brantley’s songs start, but you can expect to have a lot of fun with his music. His songs are as serious as you make them.

“I can now take myself out of the situation and I know what’s right and what’s wrong. I try to always do the right thing, but I still look at the norm and say, let’s do something completely different and see if that works for us. A good friend once told me; ‘how you do anything is how you do everything.’ I try to mirror this by taking care of myself and making good decisions about my music. I let my music speak for itself and inspire others to have a good time, let go of the bad, grab onto the good, keep priorities straight and love with all your heart.”

Brantley Gilbert does not try to copy anyone else’s style of music; he’s happy to tell his story, his truth, and he believes he can reach out and touch others through his music. To relate to a song, you have to be good at painting pictures that others can see, feel and apply to their own lives. Just turn him on, crank it up and close your eyes—you’ll instantly find yourself on a techno-colored sound adventure of shared memories that allow you to live your story through his words.

His powerful voice is an instrument of emotion and he conducts the crowds at his live shows like a country rock orchestra of human experience. Through his entire breadth of work, Brantley invites you to climb aboard his Harley and race at breakneck speed through his lyrical struggle between bad and good. He’ll forge ahead when you think he’s going to stop and he’ll slam on the breaks in the middle of musical high—just like he is reliving every emotion and memory again. He sings his story to the world, his words playing their heartstrings, which speaks to other souls and rocks them so hard one feels like they are dancing, fighting, partying, loving and living with him.