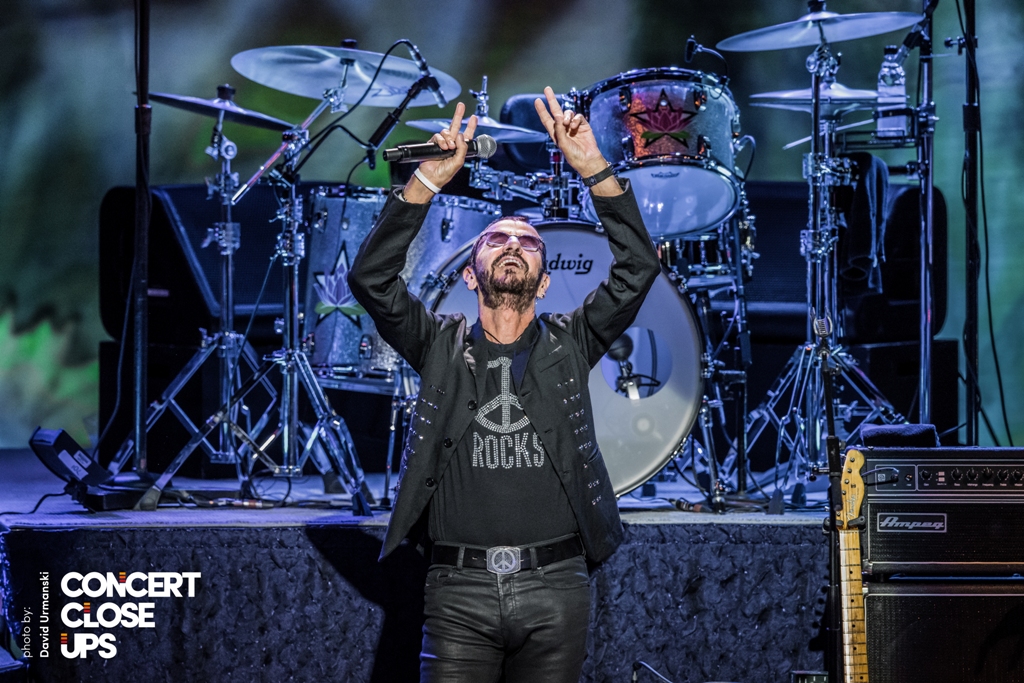 Ringo Starr & His All Starr Band commemorated the 30th Anniversary of their first 1989 tour with back to back shows at the Ravinia in Highland Park, IL Saturday and Sunday evening for a highly anticipated double bill with long-time venue and rock n’ roll fan favorite, The Beach Boys, for what proved to be a spectacular night of good vibrations, classic singalongs and dancing well into the night with a little help from Ringo and his friends.

Formed in 1961 and hailing from sunny California, The Beach Boys took the outdoor stage by storm and captivated the 3,000-plus multi-generational audience of smiling, summer concert-goers with their own unique sound synthesis of rock and roll hits starting strong with signature single “Do It Again”, followed by mega surf rock releases “Surfin’ Safari”, “Catch the Wave” and Joe Jones cover “California Sun” as well as an additional 23 timeless tunes, including Beatles cover “Here Comes the Sun”, before ending on a high note with encores “Kokomo”, Ramones cover “Rockaway Beach” and ever-fitting finale “Fun, Fun, Fun”.

As one of the most famous pop bands of all time with over 100 million records sold, The Beach Boys took the tour on the road with founding singer/songwriter, Mike Love, and vocalist/keyboardist/bassist, Bruce Johnston, who joined the band in 1965 and contributed to albums thereafter. The Beach Boys were also joined onstage by special guest actor, producer, comedian, musician and singer, John Stamos, who is best known for his starring role as Jesse Katsopolis on the ABC sitcom Full House. Stamos performed a variety of instruments throughout the set to include guitar, drums and congas as well as back-up vocals and lead vocals on the harmonically beautiful “Forever”.

Donning a “Peace Rocks” t-shirt and matching peace-sign belt buckle, Ringo Starr wasted no time getting the audience to sing along in perfect pitch and sway back and forth with him in utopian unison to the songs of yesteryear. Also making time for generous laughter between songs, Ringo jokingly recounted stories of the past to include his recollection “when I joined the Beatles, I’d written a lot of songs. None of them were recorded.” before transitioning into Beatles covers “Don’t Pass Me By” and “Yellow Submarine”.

Ringo also exclaimed his love for the part of the show deemed “The Magicial Musical Moment” led by keyboardist Gregg Rolie when performing “Black Magic Woman” where Ringo proceeded to walk offstage only to return 7-1/2 minutes later to a much deserved standing ovation directed toward His All Starr Band’s rendition of the Santana hit. While it seemed to be the perfect time to introduce the band, Ringo still managed to query the audience “What’s my name?” so he didn’t feel left out stating “I can go home now. That’s it for me!” before asking if there were any young girls in the audience and dedicating “You’re Sixteen” to all of them and those gals who are young at heart.

When it was all said and done, Ringo Starr & His All Starr Band came to Highland Park to share their stories through song while performing a variety of beloved, classic hits to a crowd of young and old alike who desperately desired the opportunity to relive iconic songs with the iconic artists who created them. As witnessed again Sunday evening, music continues to bring people together and creates connections that nothing else can destroy or emulate. Sometimes it takes listening to and witnessing bands like The Beach Boys and Ringo Starr & His All Starr Band to reawaken our souls and remind us just how much rock music is truly alive and well.

Founded over 30 years ago in stunning Central Wisconsin, Country Fest in Cadott, WI is the ultimate summer destination for the best outdoor Country Music Festival experience that brings fans back year after year. Country […]