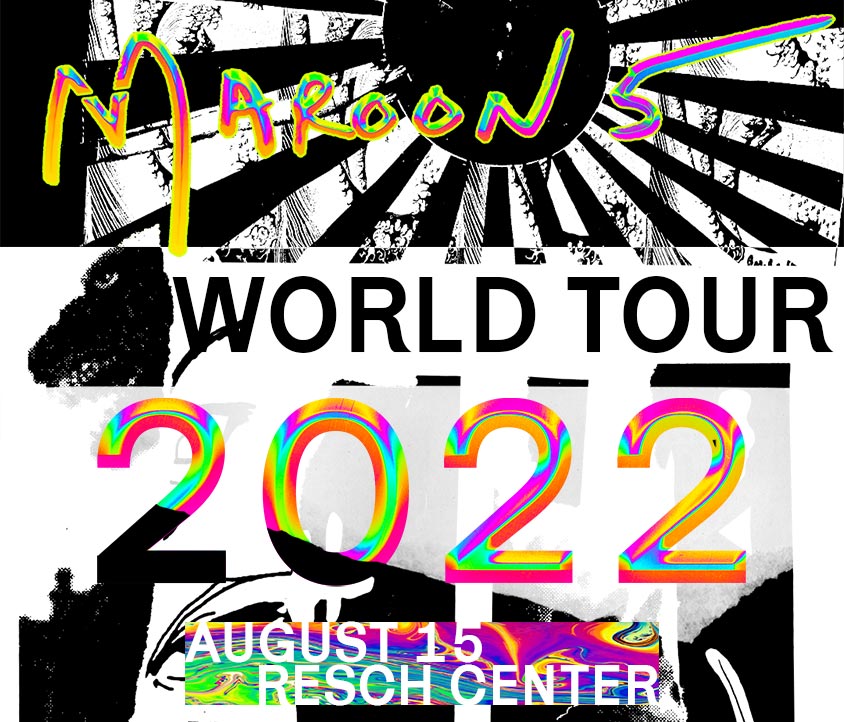 Three-time GRAMMY® Award-winning diamond-selling band Maroon 5 have revealed the details for the next leg of their 2022 World Tour dates, and it includes a stop at the Resch Center on Monday, August 15, 7:30 p.m. Tickets go on sale Friday, April 29 at 10 a.m. at ReschCenter.com, by phone 800.895.0071 or at the Ticket Star box office in the Resch Center.

A special Maroon 5 fan club pre-sale launches at 10am local time on April 26, while Spotify and LiveNation presales commence on April 27 at 10 a.m. followed by local pre-sales on April 28 at 10 a.m.

Maroon 5 has a sustained global impact as an international pop music force. 2022 notably marks the 20th anniversary of Maroon 5’s formation and their classic quadruple-platinum debut, Songs About Jane, which initially arrived on June 25, 2002, and has since sold over 20 million records. During 2021, Maroon 5 made their triumphant return to the road in the U.S., performing 30 dates in front of over 450,000 fans over the summer. Now, they’re continuing their 2022 World Tour. To date, the universally renowned Los Angeles band have achieved three GRAMMY® Awards, over 80 million in album sales, 450 million singles worldwide and earned gold and platinum certifications in more than 35 countries. Maroon 5 reach an audience of 52 million-plus monthly Spotify listeners. They have performed over 750 shows and sold north of 7.5 million tickets worldwide since their formation.

BAND FEATURING EX-MEMBERS OF RED SUN RISING & WILSON DEBUTS “THE FRAY” MONARCH consists of Ryan Williams, whose term as guitarist and songwriter for Red Sun Rising helped thrust the band from the garage to greatness and James Lascu and Matt Puhy, AKA the powerhouse […]

THE PRETTY RECKLESS – Only Love Can Save Me Now (OFFICIAL VIDEO)

February 2, 2022 Admin Hard Rock & Metal, Pop & Rock, VIDEOS Comments Off on THE PRETTY RECKLESS – Only Love Can Save Me Now (OFFICIAL VIDEO)